What are recovery residences? Expand

Recovery Residence is an umbrella term that describes a spectrum of alcohol and drug free living environments that use peer support, and other supportive services, to promote addiction recovery. The National Alliance for Recovery Residences (NARR), has identified four types, known as levels of support, that range from democratically run supportive housing to licensed residential treatment. 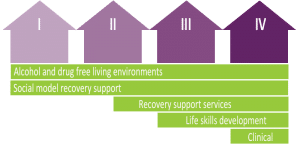 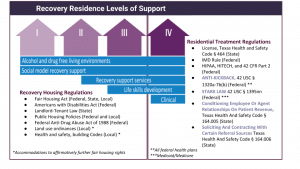 Does a recovery home have to be certified in order to operate? Expand

No. Certification must be voluntary in order to further fair housing rights.

That being said, funders and referral agents may require certification to promote quality and reduce liability.

If it is not legally required, why should I get my recovery home certified? Expand

From a recovery residence provider perspective, certification can increase revenue, decrease liability and build on strengths.

Who developed or set the standards? Expand

The National Alliance for Recovery Residences (NARR) has and continues to curate best practices, which is the basis for the quality standards. Recovery housing can be traced back to the 1840s, and today, they can be found across the US. Starting in the 1950s/60s, the Association of Halfway House Alcoholism Programs (AHHAP) formed to promote quality. In the 1970s and 80s, regional provider organizations began forming to create regional and state standards and certification programs. Fast forward to 2011, NARR formed and developed a national standard with the input of representatives from 15 different states. In 2013, NARR and AHHAP merged, making NARR the largest and oldest organization of its kind. The NARR standards represent the collective wisdom from across the US and across time.

Version 3.0 of the standards is now available.

Who certifies a recovery residence? Expand

The National Alliance for Recovery Residences (NARR) designates state affiliate organizations that are responsible for certifying recovery residences and administering a grievance process.

How much does certification cost? Expand

Because the cost of certification is determined by the state affiliate organization, the price ranges from state to state. The cost must cover:

Do we have to get re-certified? Expand

In accordance to NARR's standards, Affiliates can choose to re-certify every year or every 2 years.

For example, Texas certifies every 2 years.

Are there scholarships or discounts that can be used to offset the cost of certification? Expand

To promote certification, a growing number of government agencies and foundations are working with NARR state affiliates to help offset the cost of recovery residence certification. Contact your state affiliate to see if there are scholarship funds available and eligibility requirements.